Product was successfully added to your shopping cart.


Additional 25% Off in Bagsy Bargains
with code BARGAIN

Special occasion dressing doesn’t have to be a drag

Some parents have children who don’t mind dressing up for the holidays and some parents just get lucky.

“We took Christmas pictures in early November and my then 2.5 year old decided it was another dress up for trick or treating,” Lauren said. “We told the photographer to ask her to say trick or treat instead of cheese. Worked like a charm!”

There are some tried and true methods to get the kids on board with holiday attire. And one of the first is to try and find clothes that are both cute and workable.

Good options can be found at The Beaufort Bonnet Company which has branched out to offer a lot more than their signature bonnets as well as Bailey Boys, started by Diane Bailey when she had a hard time finding clothing that would fit her young sons.

Rosalina Baby Boutique, with its variety of picture smocking options, and bella bliss which delivers both comfort and style are two other possibilities.

“Make sure it is something comfy,” Cecilia said. “It can look nice and still be comfortable.”

“You could also make them think it is their idea,” she said. “Give two options both of you would be okay with if they picked it.”

Rachel goes so far as to let her youngest, and pickiest, child pick her dress and then the rest of the family dresses to match.

For Alexis, the grandparent rule applies when her mom picks out holiday outfits for the grandchildren.

“You don’t mess with Grandmas,” she said. 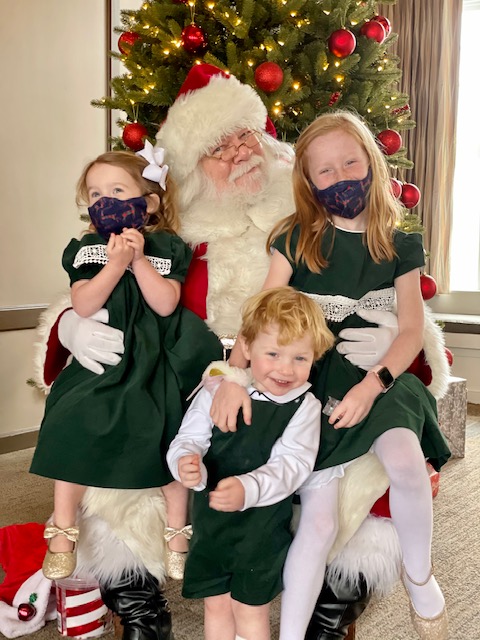 More than a few moms put their foot down too for the dress code on pictures and holidays.

“You wear what you want all day long,” Stella says she tells her two daughters. “I am asking for one hour a week.”

“My husband helps,” she said. “He gives them the ‘This would really make your mom happy. And we all know that we want mom happy.’”

Sometimes it is a particular item of clothing that is the deal breaker, even if the formal outfit is not the issue.

“My daughter loves wearing fancy dresses, so she was excited to take holiday photos last year,” Andrea told me.

That was until she tried to put tights on her daughter.

“It was an affront to all the gods,” she said. “She lost her mind. I never saw anything like it. How DARE we, try to force this torture upon her wee legs?! We immediately surrendered—tights were off and ankle socks were on instead. Pics were lovely. You would have never known that moments before our darling daughter had thrown an epic fit!”

Karen’s son always had to have his belt.

“Not that we insisted on it, that he refused to wear pants without a belt,” she said. “Not needed functionally but needed for some reason.”

And no one is above a little extra incentive.

“We bribe them with ice cream,” Katy said. “My son wanted to take photos in his sweatpants this year.”

Shannon Benesch jokes, somewhat, that parents get a choice too: “Your kids in cute clothes, or your kid smiling in their pick. You can’t have both!”

But with a little extra effort this year, maybe you will get lucky too.

Posted in News By